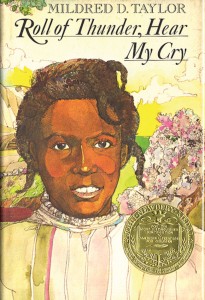 The second Ohio author to appear on the American Library Association’s list of Top 100 Banned/Challenged Books: 2000-2009 is Mildred Taylor. Her award-winning book Roll of Thunder, Hear My Cry appears at #66.

Taylor was born in Jackson, Mississippi, but spent her childhood in Toledo and graduated from college there. After spending two years in the Peace Corps and earning a master’s degree, she began writing. Taylor’s books are based on family stories told during childhood gatherings and therefore strongly reflect her own family history. Roll of Thunder, Hear My Cry was only her second novel. In addition to winning the 1977 Newbery Medal, it was a National Book Award nominee, an ALA Notable Book, and a Kirkus Choice and was listed as a New York Times Book Review Best Children’s Book 1970-1980.