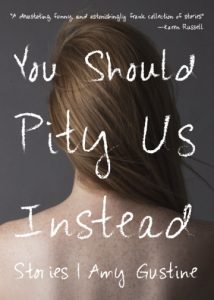 We asked Amy Gustine, one of our Ohioana Award Fiction finalists, to provide some insight about her work. Amy, thanks so much for taking the time to do this. We appreciate your work and your support of Ohioana!

Ohioana: What inspired you to write your stories?
Amy Gustine: The collection is made up of stories written over the course of ten years, so each one has its own origin story. In general, though, I’m intrigued by the unanswered questions and the peripheral people in news stories—the things happening behind the scenes. The title story, for example, started with wondering about the experience of being married to someone like Christopher Hitchens, a very vocal, public atheist intensely critical of religion. As the story developed, obviously it wasn’t Christopher Hitchens’ actual spouse I was interested in, but rather the person I imagined in Molly, whose ambivalence sometimes clashes with her husband Simon’s unyielding certainty. I’m generally interested in morality—its source, its internal conflicts—and so that also was a natural fit for this story. The character of Adoo in the story was inspired by an article I happen to read about an uncontacted tribe of people infected by the common cold in Peru. Except for a small number of children, the tribe perished, and the children had to be placed in adoptive homes in the U.S. and Canada. As so often happens in my work, many seemingly disparate incidents or people I read or hear about come together like puzzle pieces to create something new.

Ohioana: How does a sense of place inform your work? If that place happens to be Ohio, would love your thoughts on that.
Amy Gustine: I grew up in Toledo, Ohio in a small family of introverted homebodies and I don’t have any aunts, uncles or first cousins. For me, then, place has always started at home, and setting and society were for a long time overshadowed in my imagination by intimate relationships. I’ve worked consciously to step out of the house, to look up and down the street and across town imaginatively, but even that process started with my family. My grandparents were working people. During the Depression one of grandfather’s picked up bricks for a dollar a day and was involved with the early union movement in Toledo. One of my grandmother’s was the first woman to work at a large chemical lab in town. This type of family experience fed an interest in local history, which led to stories on things like the famous 1934 Auto-Lite strike here in Toledo, a defining moment in the development of labor protections. One of my great aunts was a scab in that strike, and the rift it caused never completely healed. So relationships are always the starting point in my work, and setting follows from them. Beginning with the characters is the only way I’m able to enter the work emotionally, to attach myself enough to walk the long fictional road, but I have found that I’ve grown more sensitized over the years to the way that place creates character, the way the physical and social landscape shapes us. That’s where setting becomes interesting to me—where it impacts character.

Ohioana: Can you tell us about your writing process?
Amy Gustine: People talk about being a planner or a “pantser.” In other words, you either figure the plot and characters out ahead of time, or you start writing and see where it goes, flying by the seat of your pants. E.L. Doctorow famously split the difference, saying that writing was like driving at night in fog: you can only see as far as your headlights, but you can make the whole trip that way. I’d say my process is closest to Doctorow’s, but more serpentine and loopy. I’m driving at night, in the dark, consulting a map I drew that is in fact just the roughest sketch of what I assume the landscape and roads look like. I discover the flaws in the map as I write, the forks in the road, the detours and potholes. I spy interesting stops and surprise exits, too, then I realize I forgot something at one of those stops and have to double back. In other words, I plan, then I write, then I re-plan, then I write some more, and on and on as I narrow down the project. I’m always too ambitious to begin with, and inevitably have to be content with the destination I achieve rather than the one I hoped to reach.

Ohioana: What would you like to tell us about the publishing process?
Amy Gustine: My publishing experience with Sarabande Books was uniformly wonderful. The managing editor at the time, Kirby Gann, made significant editorial suggestions about one of the eleven stories in the collection, and his comments proved very astute. The revisions made it a much better work. Each of the other stories was thoroughly, carefully line-edited, which I really appreciated. When the book came out I felt confident that it truly was the best it could be. I learned some things about promoting a book by working with Sarabande’s publicist, the fantastic Ariel Lewiton, but I would certainly be keen to know more. It’s kind of an opaque process for a writer outside the central literary world of New York City.

Ohioana: What would you tell anyone who wants to write a novel or story collection?
Amy Gustine: Read novels and stories you like two and three times. Read them first for fun, then again to spot what I call “the strings”—like a puppet in a theatre. There are so many choices when you construct something out of nothing. Point of view. Order of scenes. Which scenes to relate in detail, which to summarize. What part of the characters’ past to relate. What tone to use. How to divide up the text into chunks—sections, chapters, parts. How to label those parts, or whether to label them at all. The choices are so staggering, and each work so magically unique in its success, that the aspiring writer has a tremendous uphill learning curve. They’ll have to grab on and start learning in earnest. Part of this will be giving up a great deal of the innocent, easy pleasure of letting a great author chauffer you around town without paying attention to the route.

Ohioana: What are you currently working on?
Amy Gustine: I’m writing a novel about a real person—a politically and cultural important woman with a complex, controversial legacy. The novel spans a lot of time, involves a lot of hot-button issues, and features a lot of major historical events, so the road is long, curvy, bumpy, and I don’t have a great map. It feels less like driving and more like crawling on my knees.

Ohioana: Any inspirational quotes from other writers that you enjoy?
Amy Gustine: I got that last one from Vladimir Holan. “From the sketch to the work one travels on one’s knees.”

One of my favorites is Ernest Hemingway’s dictum: “The first draft of anything is shit.” That might sound depressing, but it’s just the opposite for me. The idea that I have to write something good today is paralyzing. It’s especially terrifying during the first draft of a long project. When I think of Hemingway’s words, I think okay, so I’m going to write a piece of shit today. Tomorrow I’ll worry about trying to polish a turd into a golden nugget. That gets SOMETHING on the page to work with, and something is always infinitely better than nothing.

A couple of other helpers I cling to include:

“When you get stuck, go back to the physical world.”
–Ron Carlson