Today we have a guest post by Ohioana’s executive director, David Weaver, who served as development director for nearly eight years before assuming his new position in September. On the anniversary of John F. Kennedy’s assassination, David reflects on his memories of that day and on the Ohio connection to one of Kennedy’s trusted advisors and friends. 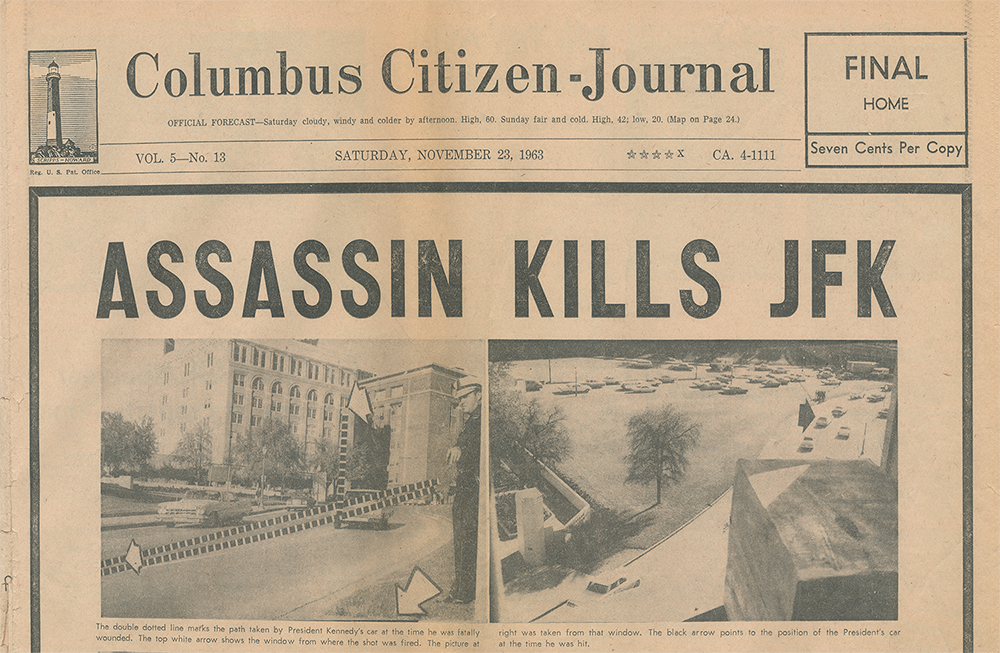 “Today marks the 50th anniversary of the assassination of President John F. Kennedy – an event that no one who was alive and old enough to remember will ever forget. I myself was a sixth-grade student at East Linden Elementary School. I can still vividly remember my teacher, Mrs. Rogers, ashen faced as she told us, “I don’t know quite how to tell you this, but the president has been shot.” Soon we learned that the man everyone knew as JFK was dead. Like all Americans, my family spent the next three days transfixed before the television. I read the special edition of the November 23, 1963 issue of the Columbus Citizen-Journal and put it away as a keepsake that I have to this day.

You may not know this but there was a close Ohio and Ohioana connection within the Kennedy White House. Columbus-born Arthur Schlesinger, Jr., was a noted teacher and historian who had won the Pulitzer Prize and two Ohioana Book Awards by the time he joined the Kennedy administration in 1961. Schlesinger had been a friend of Kennedy’s since they had been classmates at Harvard. He served Kennedy in a number of capacities: speechwriter, historical consultant, adviser. But mainly he was there to document the administration in preparation for the memoir Kennedy planned to write once he left the White House. The assassination, however, changed those plans irrevocably. Schlesinger decided to take the notes he had compiled during the thirty-four months of JFK’s presidency and wrote A Thousand Days. (The title was taken from one of the passages in JFK’s memorable inaugural address). The book, the first by a member of Kennedy’s inner circle, was released in 1965 and won both a Pulitzer Prize and a National Book Award.

Schlesinger would continue teaching and writing for four more decades. He famously coined the term “imperial presidency” in the title of his book about the Nixon administration and its abuses of power. In 1979, Schlesinger won a second National Book Award for Robert Kennedy and His Times.

In 1992, Schlesinger came to his native Columbus to receive Ohioana’s highest accolade – the Career Medal. At the ceremony Schlesinger admitted that since his family had moved to Iowa when he was only five he did not have many memories of his birthplace. But he spoke of the summers he spent at his grandmother’s farm in Xenia and told the audience, ‘I have always felt an Ohioan in spirit.’

Schlesinger remained active to the end of his life; he was one of the first contributing bloggers when the Huffington Post was launched in 2005, two years before his death at the age of 89. During his long career he produced more than thirty books. A Thousand Days remains probably his most famous work, one that is both a historical record and at the same time a memoir of and a tribute to the friend whose life and presidency were cut tragically short on that sunny day in Dallas.”