One of the highlights of every holiday season is the release of new films – how many of this year’s crop have you seen? Studios release their biggest and most important films at year’s end not only to draw huge audiences, but also to get the attention of the major awards competitions. Of course the granddaddy of all movie prizes is the Oscar ©, given by the Academy of Motion Picture Arts & Sciences.

Did you know that Oscar and Ohioana share the same birth year? The first Academy Awards © were presented at the Roosevelt Hotel in Hollywood on May 16, 1929 – less than five months before Ohio First Lady Martha Kinney Cooper gathered a committee of volunteers at the Governor’s Residence in Columbus to establish a special library dedicated to collecting, preserving, and celebrating Ohio literature and other creative endeavors.

In our parallel trajectory, many Ohioans have been the recipients of the Oscar, including Clark Gable, George Chakiris, Eileen Heckart, and Paul Newman. Halle Berry made history in 2002 as the first (and thus far only) African American winner of the Best Actress award. Composer Henry Mancini is our state’s all-time winner at the Oscars, receiving four statuettes for his music, including the Best Song of 1961, “Moon River,” one of the classics of the American popular songbook.

An Oscar winner whose name you might not be as familiar with is author and screenwriter Donald Ogden Stewart. Stewart was born in Columbus on November 30, 1894 (just twelve days before and two miles away from other future celebrated writer – James Thurber). After graduating from Yale and serving in the Navy in World War I, Stewart settled in New York and began to write. His quick wit soon led him to becoming a member of the Algonquin Round Table, the celebrated literary circle that also included Dorothy Parker, Robert Benchley, and Ernest Hemingway.

Stewart turned to writing plays, and success on Broadway led him eventually to Hollywood. Among his notable screenplays in the 1930s were The Barretts of Wimpole Street, Marie Antoinette, Holiday, and the 1939 classic, Love Affair (remade in 1957 as An Affair to Remember).

In 1940, M-G-M hired Stewart to adapt Phillip Barry’s play The Philadelphia Story for George Cukor’s film version starring Katharine Hepburn, Cary Grant, and James Stewart (who was no relation). The film was a critical and popular smash, and earned six Oscar nominations, including the two Stewarts, both of whom won – James Stewart for Best Actor and Donald Ogden Stewart for Best Adapted Screenplay.

The host at that year’s awards ceremony was comedian Bob Hope (another Ohioan, from Cleveland). Hope would later recall it as “one of those bathos-drenched evenings where winners thanked everyone from their producer, director, and co-stars down to the ‘little people’ – by which I assumed they meant pygmies, dwarves, and elves.” Then Donald Ogden Stewart’s name was called.

Walking to the podium and taking the Oscar in his hand, Stewart said, “There’s been so much niceness here tonight that I’m proud to say I’m totally responsible for the success of The Philadelphia Story. Nobody lifted a damn finger to help me.”

The audience broke up in laughter and gave Stewart a huge ovation. Hope would remember it as one of the favorite moments of his record-breaking nineteen times as the awards host.

Stewart continued writing screenplays throughout the 1940s, working with top-flight directors such as Cukor and Michael Curtiz, and stars such as Hepburn, Spencer Tracy, William Powell, and Lana Turner. Then came the second “Red Scare” of the early 1950s. Stewart, who had been actively involved in the Hollywood Anti-Nazi League during World War II, admitted that at one time he had belonged to the Communist Party. Blacklisted by Hollywood studios, Stewart and his wife moved in 1951 to England, where he remained until his death in 1980 at the age of 85.

While not as well remembered today as some of his contemporaries, many of the films for which Stewart wrote his sparking screenplays continue to entertain. As his biography on the Internet Movie Database states, Stewart was “noted for his satirical observations of American high society, best exemplified by The Philadelphia Story.”

So as this movie-laden holiday season takes us into a new year, and as Hollywood prepares for the 90th anniversary Oscar ceremony on March 4 – Ohioana raises its glass to Donald Ogden Stewart. 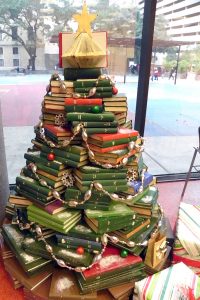 It’s never too late to buy Yuletide/Holiday/Christmas presents. Even if you were to be abducted by aliens on December 24 and not released from the Mother Ship until December 26, you can always apologize to those on your Christmas list. They’ll understand, especially if you take a tip from the Wise Men and arrive bearing a gift. And what gift is better than a book?

And you can buy books everywhere — the grocery store, the drug store, large chain stores, at the airport, used book stores, thrift stores, art and craft stores, independent and chain book stores …. can you think of some other places that we missed?

And isn’t it wonderful to unwrap a book on a holiday morning? All of the noise is over and you can sit down and read. And if reading a new book on a holiday makes you happy, you know it will make your family and friends happy too.

If you look up the word “pathos” in the dictionary, you’ll find The Gift of the Magi by O. Henry.

Not really. But we consider that an oversight to be corrected.

Some people consider the story comic, what with the twist and all: the married couple each giving up something cherished in an attempt to give one another a significant and meaningful gift — only to wind up weirdly missing the mark.

How is that funny? It’s not. It makes you cry. They’re poor as church mice and at the end of it all, what do they have to show one another? Bupkis. Except for the love between them, of course.

One of Columbus’ most famous temporary residents was the author of that story.  O. Henry, the best-known pen-name of short story William Sydney Porter, spent three years in the Ohio Penitentiary on a charge of embezzlement. He’d been on the run and  hiding in Honduras, but when he learned his wife was dying of consumption (tuberculosis), he came back to the United States and faced a jury. Some of his stories were even published while he was jailed. The Gift of the Magi wasn’t one of those, but it is unarguable the most famous story written by this popular and prolific writer.

Porter died young, and we’re not sure if ever came back to Ohio after leaving the penitentiary in Columbus. Some folks say that his pen name came from his time behind those walls: “O. H.” from Ohio, and then “enry” from “penitentiary.” We think that’s a bit of s stretch but we’ll also take it.

If the story makes you cry or makes you smile, it is truly about the spirit of giving and really giving until it hurts. May the spirit of the season grow large and bright within you.

December is National Read a New Book Month, and there’s still plenty of month left if you haven’t started yet.

We’d like to suggest the latest from Jennifer Chiaverini. The Enchantress of Numbers is the story of Ada Byron Lovelace, the inventor of computer programming.

At a recent sold-out book signing event sponsored by Gramercy Books in Bexley, Jennifer answered questions and read from The Enchantress of Numbers, written as a first-person memoir of an unsung heroine of the modern era. While many in the computer world know about Ada, explained Jennifer, most people have never heard of her.

Born into wealth, privilege, and celebrity as the only legitimate child of nineteenth century super-star poet George Gordon, Lord Byron, Ada seemed to have it all. But despite the advantages, she was no more in control of her life than any other woman. And Ada, a mathematical prodigy, dearly wanted to make a contribution to the world.

Jennifer’s novel is written from the point of view of Ada, from her earliest memories of childhood to the always-looming shadow of the father with whom she never had any relationship. Ada’s mother, a wealthy woman with connections that extended to the royal family’s inner circle, believed in equality for women and directed her daughter’s rigorous education. However,  Ada was never allowed the opportunity to exercise her imagination. It was believed that the “mad, bad, and dangerous to know” Byron had bequeathed to his daughter an equally dangerous tendency towards  mental instability and against this specter, the young woman’s mother was always on guard.

At least Ada married someone who believed in her intellectual abilities, and she was able to work with the inventor of the Analytical Engine and the Difference Engine, Charles Babbage. The forerunners of the modern computer would change the world, of course, but it took Ada to create the means by which that would happen.

We hope you will consider this compelling and highly-readable book — and that you will participate in this reader-friendly way to celebrate the season!

He looks like a certain jolly old elf and he does bring gifts, but he’s not Santa. He’s King Gambrinus and he doesn’t have a special day, but maybe he should. We’d like to suggest December 5 because of its significance in United States History: it’s the day that Prohibition ended.

In 1933, after a less-than-successful run at being alcohol-free, America threw in the towel, effectively saying “Oh to heck with it,” and alcohol was again legal and could be sold, produced, transported, and generally enjoyed.

Our very own King Gambrinus statue in Columbus once adorned a brewery owned by August Wagner, a Bavarian brewer. The statue was saved even though the building is long gone, and his serene highness is now on display in Columbus’ Brewery District.

Beer is back in Columbus and all over Ohio with the rise of independent brewers. The later day beer barons and the fruits of their labors are celebrated in books like Ohio’s Craft Beers by Paul Gaston, published by Kent State University Press.  The latest addition to the genre of Ohio beer book includes Columbus Beer: Recent Brewing & Deep Roots by Curt Schieber.

King Gabrinus himself is less well-documented. He’s not exactly a god and certainly not a historic figure. He’s like Bacchus or any other merry reveler of myth; a personification of good times. With one leg up on a barrel and a foaming flagon held high, he reigns victorious over lesser beverages.